Though similar to the FIRST Robotics Competition, this program is known for its affordability and smaller team sizes. Befitting from the one on one 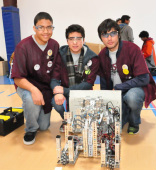 FIRST Tech Challenge is known for being slightly more racially diverse. With 35% composed of multiple minorities (compared to FRC's 27%), students are more likely able to get more face-to-face mentoring. Females involved in FRC are also more likely to be involved in the buisiness aspects of running a robotics team, whereas men usually work on building and designing the robot. However, in FTC men and women alike are crucial members to a single team. Each child on the team is very important and is treated as such. Male participants in the FRC are more likely to report an interest in the fields of science  and technology due to the fact they are dealing directly with the construction of their team's robot. Overall, in the FIRST Tech Challenge there are fewer difference between men and women in teams because of the few number of students.

Involvement in the Team: FTC vs. FRC

Though an average of 80% of students from both programs are able to get involved in team activities, there are certain aspects of FIRST Tech Challenge that are appealing to most students:
Students who participate in FTC also say that it is students who end up making the most important decisions on the team, and reject the idea that the adults do the most important jobs on the team. In all, both programs offer great opportunities for students to participate in building and designing a robot, but because of FTC's smaller teams more students are able to participate.

Financial difference between FTC and FRC 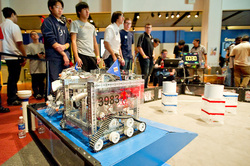 One of the biggest differences between the two programs is that FTC is known to be more affordable than FRC. 78% of FTC leaders say that their program is 'somewhat' or 'very' affordable, compared to FRC's 53%. However, because of the fewer number of students money is very important. 50% of FTC team leaders say that the reason why they discontinued their team is because of 'lack of funds,' compared to FRC's 23%. Team leaders from both programs do agree on the fact that the most difficult aspect of being in these programs are the financial difficulties. These programs encourage students to get active and involved in their sponsorships. Teaching them fundraising skills as well as public speaking skills, these students are more apt to succeed in the fields of marketing and communications.