Robots compete to score points in game of basketball. Points are scored by making baskets in three varying 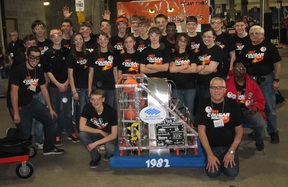 Beginning January 5th of 2012, The Shawnee Mission Northwest Cougar Robotics Team began their build season for the FIRST Robotics Competition's Rebound Rumble. Student run, the team went through the competition with both the brains and the brawn. With an impressive drive team made up of Seniors Sean Amos, Darrien Richmond, and freshman Denzel Richmond, the Shawnee Mission Northwest Cougars stormed the field and earned a top seat in the final elimination rounds. With the Channel Cats and Bronco Bots as our chosen alliance, the Cougars earned an impressive 5th place at the Kansas City Regionals and plan to place as efficiently (or better) in the upcoming years.

Summary of the Cougar Robotics 2012 Season

Kansas City Regional Competition
We attended our regional competition this weekend at Hale Arena in the Stockyards District of Kansas City. It was a very exciting event as the robots scrambled through three days of competition. The bots first arrived on Thursday to set the pits up. We trialed a few practice runs and left until the next day. Friday came with a postponed robot parade and many rounds of games. We did fairly well finishing the day with a place in the semi-finals. Due to malfunctions in the robot and Wi-Fi, however, we were not able to win the round. On a positive note, we were able to maintain top 10 throughout the entire competition, which is an achievement we are proud of.