Teams compete to score as many points as possible. Points are scored by suspending rings on the main rack centered in the playing field.

What is Rack n' Roll? 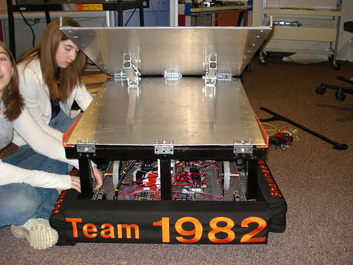 Shawnee Mission Northwest Cougar Robotics very first meeting was attending the FIRST Robotics broadcast kickoff for the 2007 season at Shawnee Mission North high school. The Kaufmann Foundation very graciously provided us and a number of Kansas City area high schools a grant to help start teams. We had no idea what FIRST was about nor knew anything about robotics. Nine students along with teachers Edwin Provost and Bob Stewart, and mentor Mick Schneider were the founding pioneers of SMNW Cougar Robotics

The 2007 game, called Rack’n Roll consisted of hanging inflated round tubes on a center structure and then for bonus getting teammate robots at least 12” off the ground. Our team decided based on our inexperience we would concentrate on just a few functions. Our robot has a simple claw to place tubes on the lowest level and a maneuverable drive train to play defense. However our best feature was a deployable ramp that allowed other teams to drive up on us and score the bonus points. After many, many, many trials and failures, the claw and ramp were finally working. The team started the tradition that still exist in working 6 days a week including 2 school holidays and a 1 or 2 of Sundays.

The Kaufmann Foundation help start so many Kansas City teams that year that they asked us to attend the Midwest Regional in Chicago instead of the Kansas City Regional. So off the team went, 9 students, 2 teachers and I mentor to the Midwest Regional. Once again we were overwhelmed at the high energy and sophistication of many of the teams. Fortunately a team from only a few miles away us, Team 1710 (Olathe, KS Northwest High School), also attended the Chicago Midwest Regional. They sort of adopted us and helped us throughout the tournament. Team 1982 scored some tubes and was able to have robots drive up on our robot in some of the matches. We were ranked 23rd but unfortunately, we did not get selected for the elimination rounds. We watched the finals in awe of the top robots performance and knew we were hooked.