Robots compete to score points on a soccer-like playing field. Robots transport soccer balls into goals while going over ramps or under pillars.

Robots play Breakaway on a 27 by 54-foot rectangular field. The field is divided into three zones separated by two “bumps.” During the game robots are controlled from alliance stations at both ends of the field. The goals are in the corners of the field and extend behind the wall and to the adjacent player stations. When points are scored, team members pick up the balls and pass them into the center of the alliance station to be returned into the game. 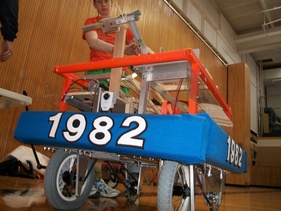 For 2010 we were anxious that we could build on the 2009 success. Once again we had about 15 students and 5 mentors. The 2010 game, Breakaway provided some new challenges for our team. The robots had to kick soccer balls into goals. However, they were two significant humps running across the field that had to be crossed. The bonus points this year was to attach to a tower and lift our robot so that the bottom is at least 20” above the field. Our first task was how to get the robot over the bumps. No drive system used previously could get us over it. After much trial and error, we developed a geared down system utilizing wheel chair wheels. For the scoring goals we developed a leg and foot system that mimicked the human foot. Our final challenge was how to lift a 150 lb. robot up. Our solution utilized a wooden drying rack to make a scissor lift that delivered a hook to the high bar and then winching ourselves up.  Another hurdle was a very snowy build season. In addition to the 2 school holidays, the team worked on two official school snow days.

The Kansas City Regional had grown to 60 teams and included a number of power house teams from Missouri and Kansas as well as the rest of the Midwest. Less than 10 teams could hang successfully in the bonus round and we were one of those. After some tough battles we ended ranked at 17th and were on the 7th seeded alliance where the other two teams were from Indianapolis. We fought hard but lost our quarterfinal match to team that include power teams 16 (Mountain Home Arkansas) and 1625 (Winnebago, IL).