Robots compete for points by scoring the most amount of game pieces into the opposing alliance's trailer. View photos from previous seasons by visiting our gallery.

The goal of Lunacy is to score as many game pieces in the opposite trailer as possible. The game starts with a 15 second autonomous period in which the robots operate according to the programs that the team downloaded to their robot. After autonomous, there is a 2 minute period where the robots are controlled by selected team members to get empty cell, handed to the robot by the “payload specialist,” to the mid-field “outpost.” A robot needs to take the Empty Cell to their human player, located in one of the corners, in order to get a Super Cell that is worth 15 points. Super cells can only be in play one at a time, and during the last 20 seconds. 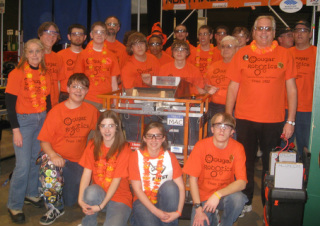 2009 started on a sad note. The summer before, one of our founding mentors, Edwin (Mac) Provost passed away. The team dedicated their season to Mr. Provost and named their robot “Mac” in his honor. We were also excited to attend the Greater Kansas City Regional for the first time. Although the trips to Chicago were a lot of fun, we wanted to test ourselves against some local Kansas City talent. Our team had grown to 15 students and 5 mentors. The 2009 game, “Lunacy”, was played on a slippery surface. The robot has to score foam balls into your opponent’s trailers. Every robot had a trailer that was connected to the robot and had to be drug around the whole match.

The challenge was how to shoot these foam balls into a moving target bent on evasion and on a low friction surface to boot. We knew teams had to score quickly as your opponents evade your attempts to score. We developed a very unique delivery system by designing a dumper mechanism to score 7 balls all at once. This strategy proved to be successful in the KC regional. We were ranked number 1 throughout most of the elimination rounds. In the very last match an opponent’s robot tipped into our and hit our kill switch, stopping us in our tracks for the rest of the game. We lost that match but ended up as the number two seed. We were very excited to select our other team partners, Teams 1939 (KC Barstow School) & 2335 (Shawnee Mission East). Our alliance won our quarterfinals and we were on to the semifinals. For the second time that day, disaster struck. After winning our first match, our robot would only go in circles and could not score. We lost that match and had to substitute another robot for us and lost the rubber match. Afterwards we discovered that the problem was only a stuck button on a joy stick, not the mechanical problem we desperately were looking for. Although very disappointed at not being able to play for the Kansas City Regional championship, we were happy about a very successful season and had honored our founding teacher Mac Provost.